Rearranging the World to Stitch the World

Don't mind me, I've been alphabetizing the world map: 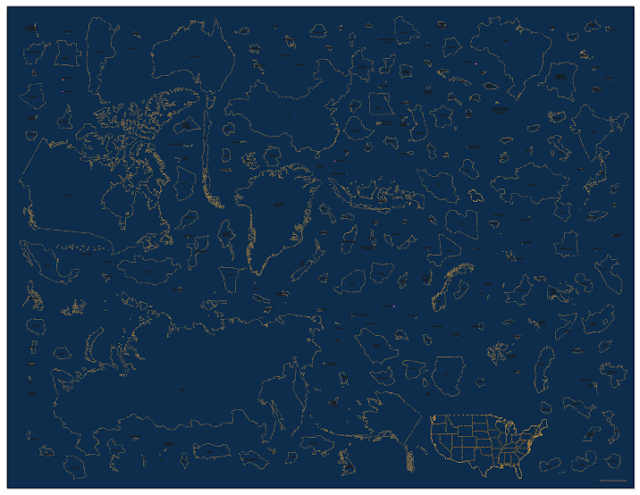 I thought I was all done and then I remembered Antarctica.
It wasn't on the list of countries and I forgot about it. ARGH! 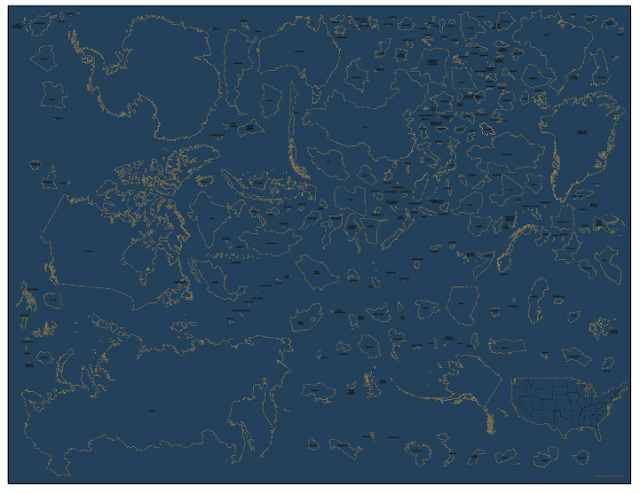 It's a large landmass and caused quite a disruption.

Next I'm going to create a mock patchwork effect with a variety of denim rectangles as patches framing each country. I've been scanning all the indigo denim available in the household to use for the patches.
When that's all done, I'll have the file printed on a large "wall hanging" by Redbubble to use as the base for my Stitching the World project.

I took a printout of the arrangement pre-Antarctica to the Textile Arts LA Materials Swap last Saturday to commence recruiting my Stitching Crew for StARTup LA.
What prompted all this rearranging?
I thought the original layout, using a standard world map, looked too much like flight paths.
I want more meandering paths: 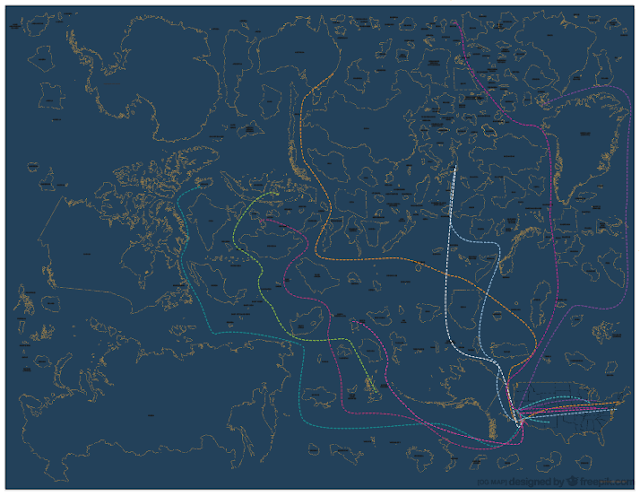 Of course the paths will ultimately be delineated by the designated stitchers!

Want in on the action?
CLICK HERE TO ANSWER THE 4 QUESTIONS (goes to the previous blog post)

Leave a comment below if
1) you are in SoCal and would like to be part of a Sunday Stitching Crew.
We will stitching the piece for the StARTup LA Art Fair every Sunday, January 5-February 9.
Location and time TBD on west side of LA. [Either my home or at Helm's].

2) you'll be in Los Angeles over February 14th weekend and you're interested in publicly stitching during the Art Fair. Location is Hotel Kinney Venice Beach.

Here's my latest project:
Interested in participating?
Choose the "Color of your journey" from this chart: 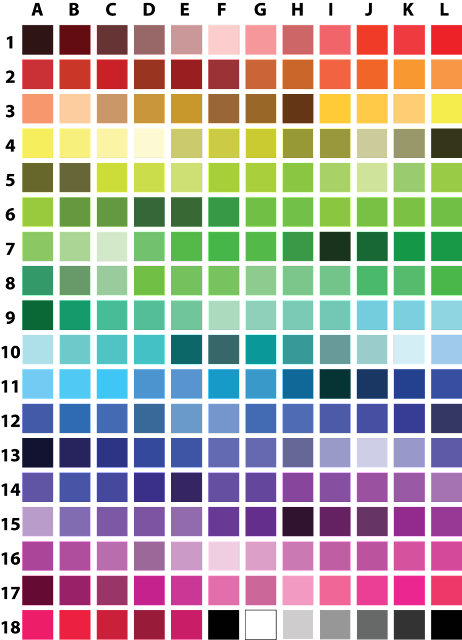 Answer the 4 Questions in the survey here:
Posted by Anne M Bray at 4:06 PM No comments: Links to this post

Here's my piece that is in this group exhibition.
It's one of my Procreate experiments which I then had printed on 100% cotton by Spoonflower.
Next time, I'll do it on a synthetic so the colors will be richer. (Above image is the original digital file).
Posted by Anne M Bray at 3:13 PM No comments: Links to this post 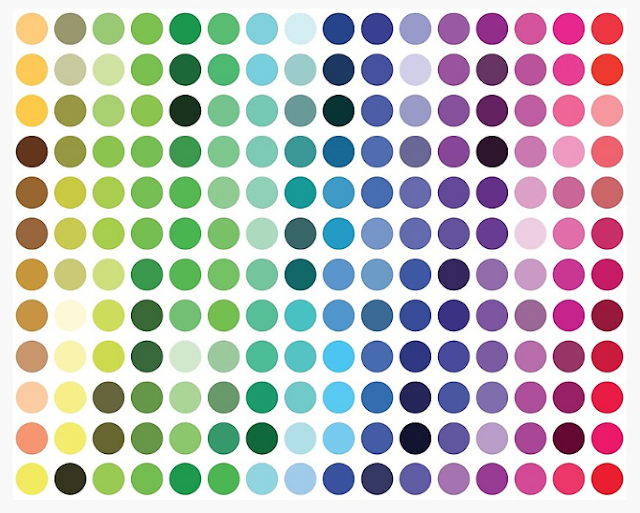 It's (mostly) the web color chart as dots.
And I mainly did it for the socks: 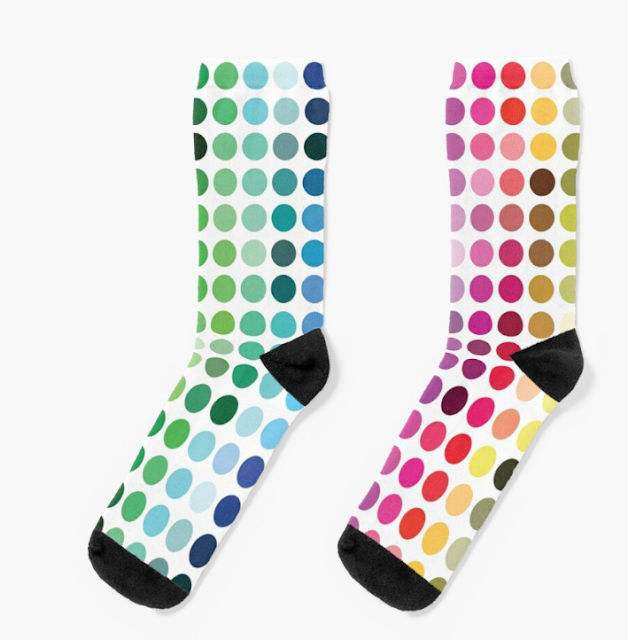 I didn't intend to have different colored socks in the pair, but I kind of like it that way.

Redbubble link for everything available in this print.
Link for just the socks.
Posted by Anne M Bray at 4:10 PM 2 comments: Links to this post

A QR code and clouds. My submission for this week's Spoonflower challenge.

The challenge, from Spoonflower:
In the hands of our imaginative designer community, this week’s 1-Yard Cheater Quilt challenge is sure to break outside of the creative box. Think beyond the traditional 6″ block cheater quilt; the 1-yard (42” x 36”) canvas is your playground for color, shapes, composition and style. Will your eye-catching quilt double as a modern wall hanging and offer a sleek aesthetic or maybe you’d like to cater to children? However unique you decide to go, keep in mind that your quilt should not be set to a centered repeat.
Winners will be announced September 12
Posted by Anne M Bray at 10:20 AM No comments: Links to this post

What I wrote with my submission:
These are small (3x3”) paper weavings from reject color laser printouts of my surface designs. I design prints for a mass market underwear and loungewear company. Since I create artwork for both women’s panties and men’s loungewear, I’m combining the feminine and masculine patterns into one weaving. I’m deliberately choosing combinations that “don’t match”. I started this project on 1/23/19 and since I have an endless supply of reject prints, the project will continue indefinitely.
Posted by Anne M Bray at 1:25 PM No comments: Links to this post

I reached my 100/100th Procreate texture doodle yesterday and Tumblr marked it as X-rated:
What's next? Will I keep at it and go beyond 100? I think yes.

I also want to figure out how to marry Stephen Sidelinger's surface design syllabus with teaching Procreate and pitch it as an e-course for Otis Extension.
Posted by Anne M Bray at 10:20 AM No comments: Links to this post

It just so happens the Deee is very close to the colors in the Spoonflower Limited Pallette challenge: 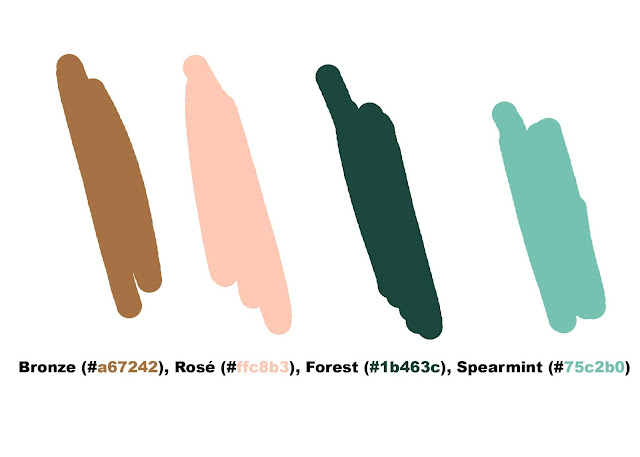 A repeat is born:

Before this year's A-Z, I started doing paper weavings from reject printouts of my pattern designs at the day job. (I am a surface designer for a mass-market underwear and loungewear company).
I mentioned the process in the post about the Fluevog Faith.


Got a #weaving idea this AM during my commute: use "reject" printouts of panty design combos from work. Fun! Now how do I get it to hold together? 🤔 #pattermixing #annembray
A post shared by anne m bray (@annembray) on Jan 23, 2019 at 9:47am PST

How did I solve my "hold it together" dilemma? Sticking a 4x3" mailing label on the back!

I diligently did this every morning through the first week of April,
until I started getting to work too late to be stealth about it.

This is the last batch, April 2-5:
Parameters developed over the course of the project (as they tend to do for me):

Here's a Camo / Blue Ditsy set from March 6-21:
I've submitted this series to be part of the Otis 100 Projects. We'll see if anything happens.
I'm also committed to get back to weaving detritus. It's relaxing!
Posted by Anne M Bray at 5:53 AM No comments: Links to this post

I've taken a breather from the Fluevogs this month.
Instead, I've been learning Procreate in an eCourse with Traci Bautista. It's been super fun.

This wacky print came out of experimenting with McGyvering a repeat in Procreate -- just to see if it was possible: 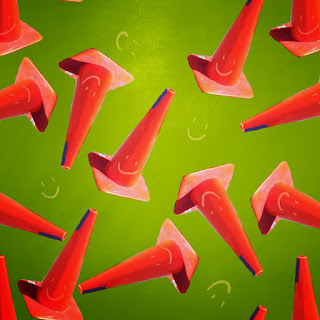 There were some issues in getting it into a real repeat, but I didn't have to totally rebuild it.

Now it's up on Spoonflower, because a friend wants to sew a raincoat with it.
I want one too!
[Not yet available for purchase, I have to go through the proofing sample phase first.]

What is helping me "stay the course" (because I'm a terrible ecourse learner) is I turned my class experiments into a "100 a Day" project on Instagram. Today I'll be creating #52/100! More than halfway done! Mostly I've been creating "background" textures -- the cones are a definite anomaly! A couple of Fluevog motifs snuck in there as well.
Here's where you'll find them all: #100_amb 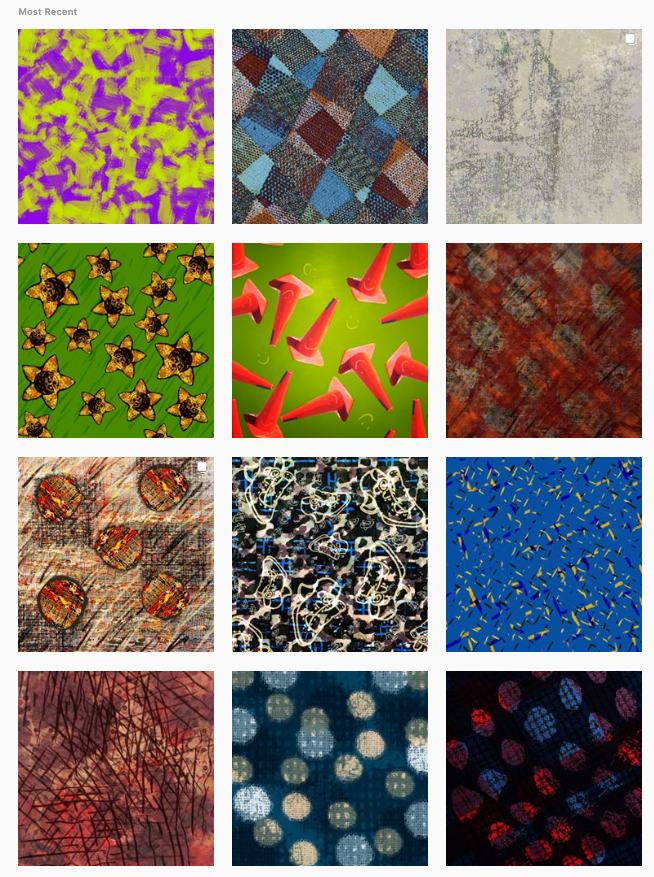 Have you tried Procreate yet?

Linking with
Catherine's #ShareAllLinkup
Shelbee's On the Edge of the Week

Email ThisBlogThis!Share to TwitterShare to FacebookShare to Pinterest
Labels: #ShareAllLinkup, 100 a Day, green, Instagram, objects, On the Edge of the Week, orange, procreate, spoonflower, wacky print

My third year of drawing and creating repeats of Fluevog shoes (and boots!) alphabetically went smoothly, for the most part. There always seems to be ONE shoe that gives me a hard time and this year it was Miss Jodie:

I worked on a stealth version of the repeat at the day job, but was not satisfied with the results: 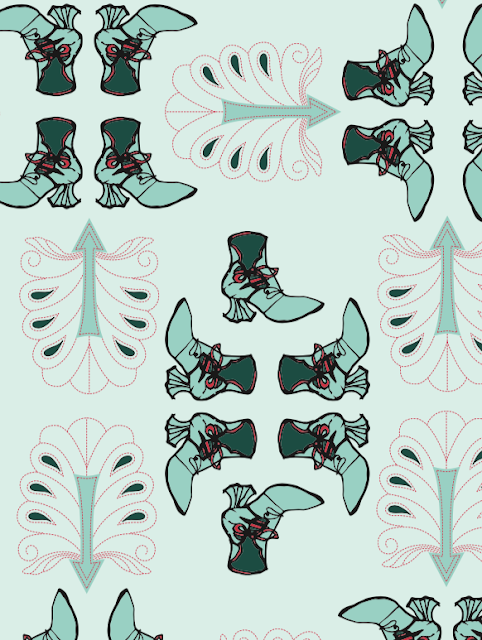 The printout, with hand drawn "possible additions" has been pinned to the wall next to my computer since 4/12: 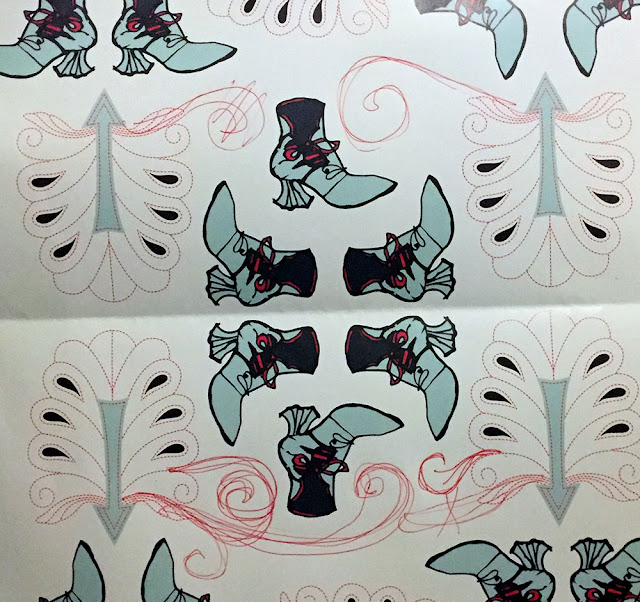 Wait, let me give you a wide shot of my workspace:
OK, enough about Jodie.
And my messy desk.

Allow me to opine upon the A to Z Challenge.
Well, what can I say? I work well with parameters.
The A-Z helps me zero in on getting a body of work completed, or in the case here, started.
Every year, through the challenge, I discover new blogs to follow, catch up with blogging mates, and generally have a blogging good time.
This year, I added an A-Z blog roll at the footer here [see bottom of page], as well as an A-Z Pinterest Board.
I used to use Bloglovin', but haven't gone over there in eons. Maybe it's the interface.

What's next?
I hope to keep my Fluevogging momentum up and get these repeats uploaded to Redbubble, Spoonflower, etc soon. [I get a commission for sales. Thanks for your support!]

Have any favorites that you'd like me to do first? Let me know in the comments.
Here's my A-Z Fluevogs 2019 table of contents, in a randomized alphabet form.

#AtoZchallenge Z is for Fluevog Zachary 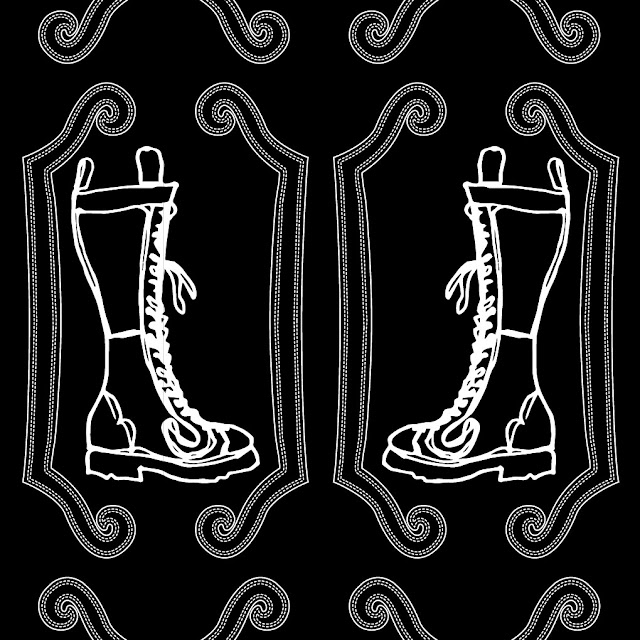 And if you're curious about how others worked their ABCs, here's the A-Z Challenge master list.
Posted by Anne M Bray at 6:52 AM 2 comments: Links to this post

#AtoZchallenge Y is for Fluevog Yolanda 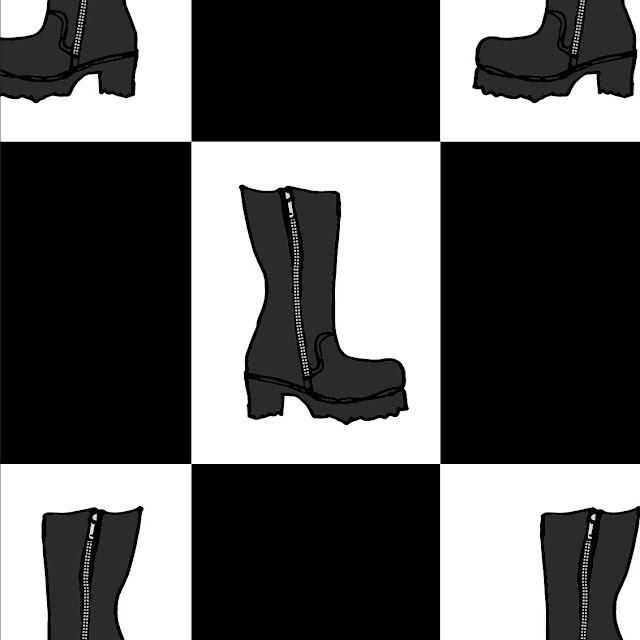 Posted by Anne M Bray at 7:32 AM No comments: Links to this post 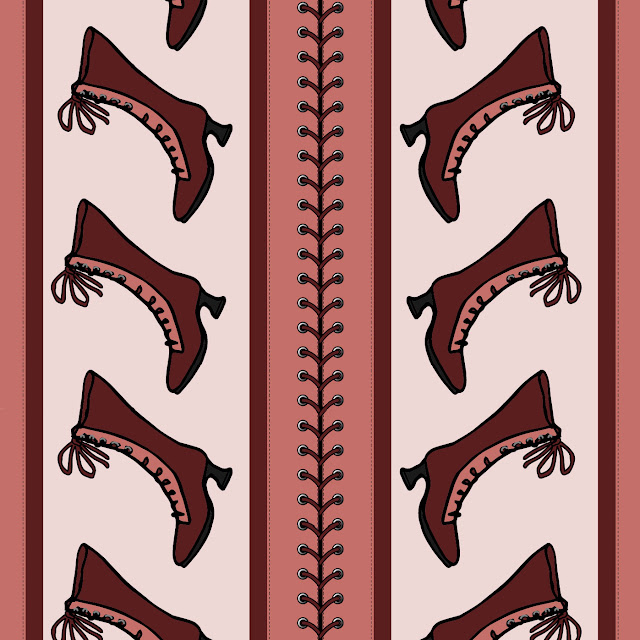 #AtoZchallenge W is for Fluevog Watusi 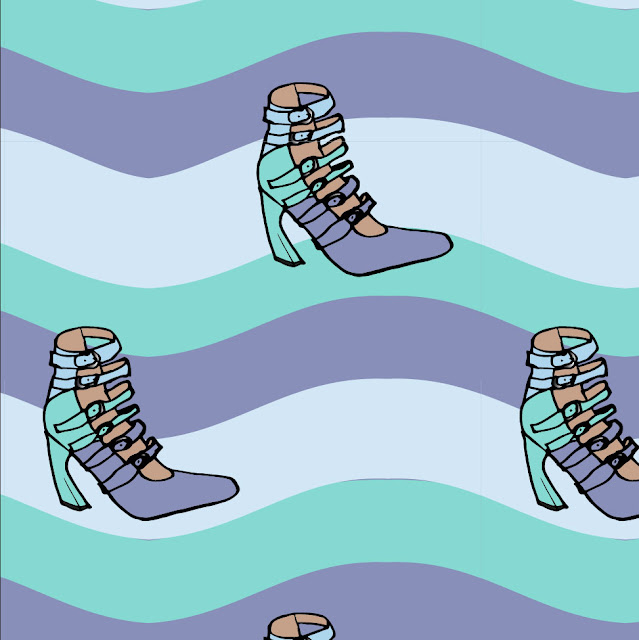 There was a movie with a good Watusi scene. Anyone remember which? Was it Hatari?
Posted by Anne M Bray at 6:51 AM 6 comments: Links to this post

#AtoZchallenge V is for Fluevog Victoria

This was a special request from Century, a Facebook Fluevog Friday member.
(I seem to have been blocked from the group. Sigh.)

She saw my sketch and wanted to purchase it.
I decided to offer her a fully painted illustration: 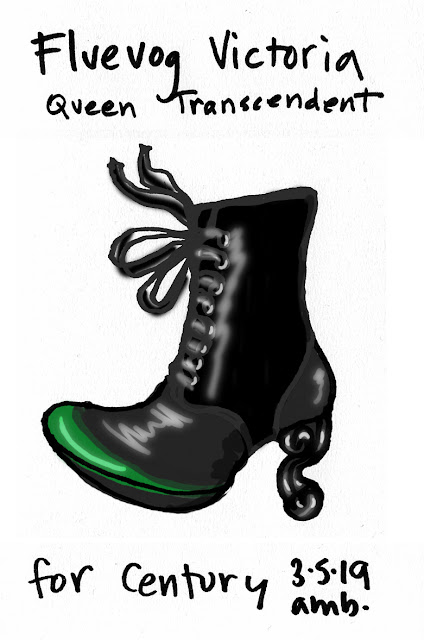 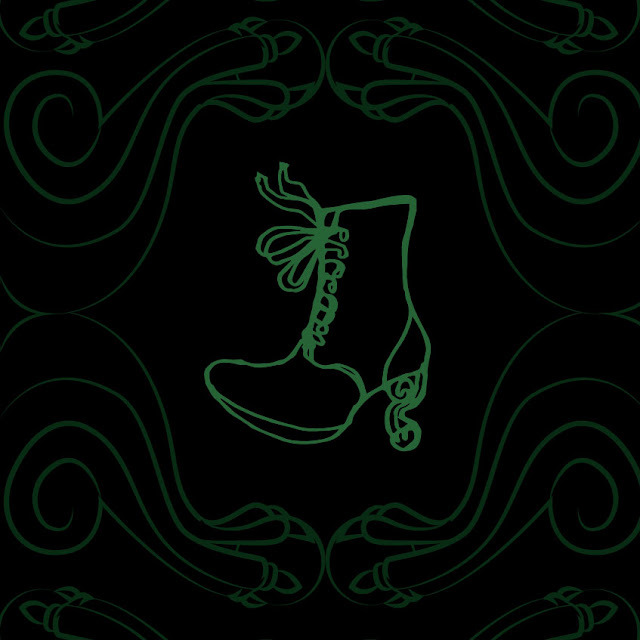 #AtoZchallenge U is not for Fluevog Ursula, it's for Ucayali

Silly me, I did this one last year -- which I didn't realize until late in the day.

I put out a desperate call in many Facebook Fluevog groups and Nikki came to the rescue.
She's been working on an extensive Fluevog archive on Instagram.
Here is her entry for Ucayali:

Thanks Nikki, this one's dedicated to you! 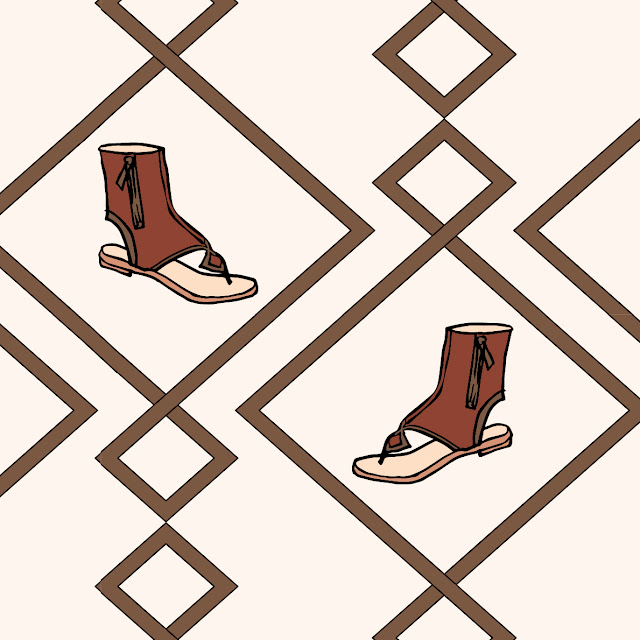 Posted by Anne M Bray at 6:20 AM No comments: Links to this post

#AtoZchallenge T is for Templeton 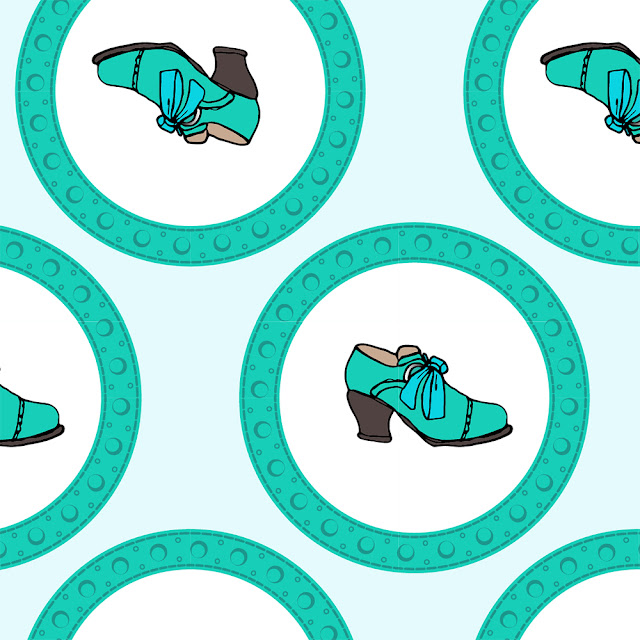 #atoZchallenge S is for Fluevog Safia 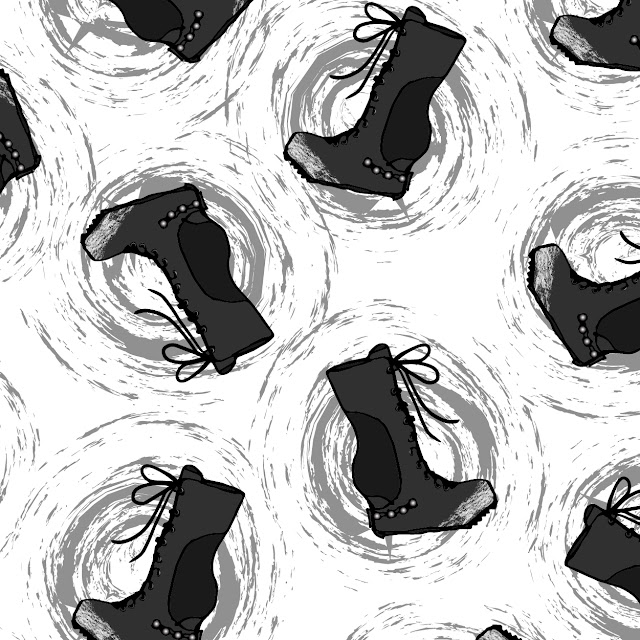 #AtoZchallenge R is for Fluevog Ros 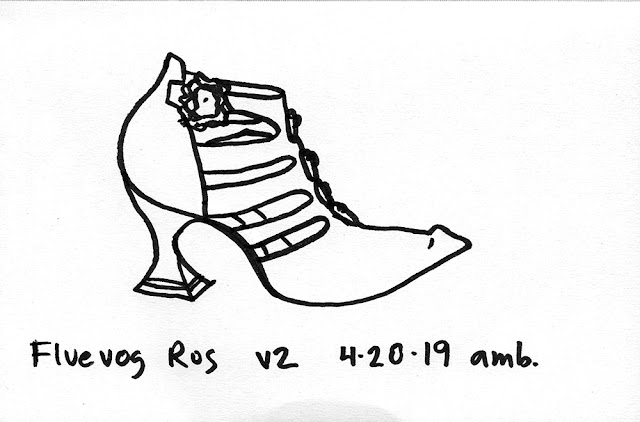 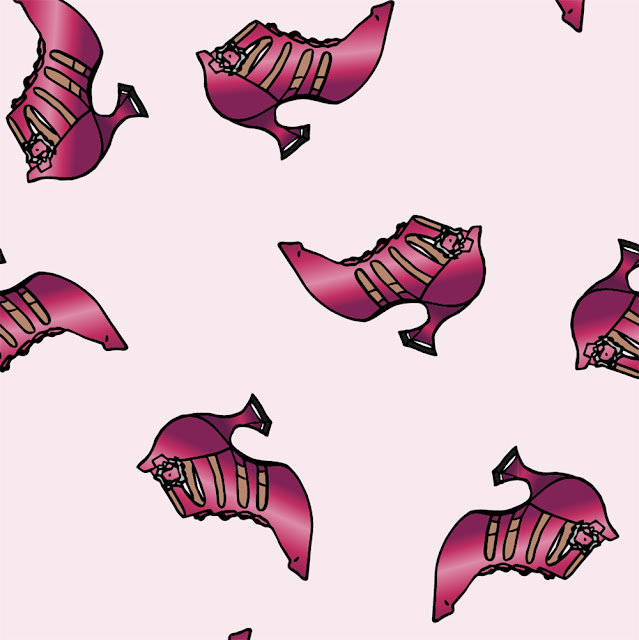 Posted by Anne M Bray at 6:12 AM No comments: Links to this post

#AtoZchallenge Q is for Fluevog Quincy

This one is a men's shoe. 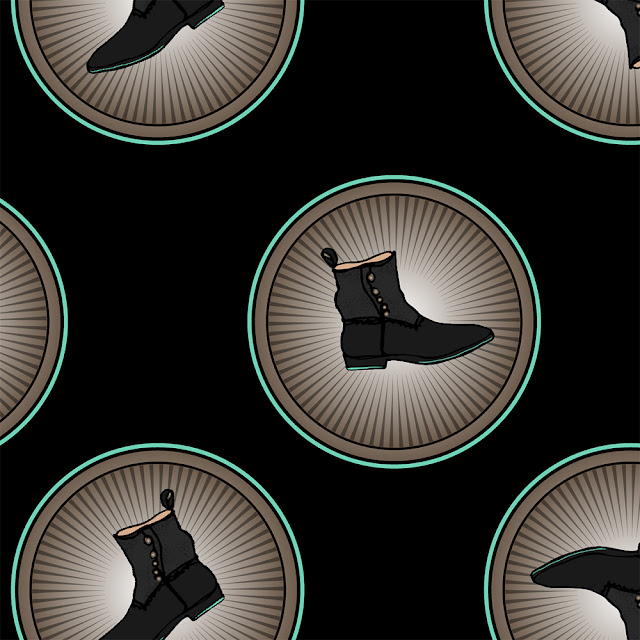 Posted by Anne M Bray at 6:47 AM No comments: Links to this post

#AtoZchallenge P is for Fluevog Portage

This one required a total redraw: 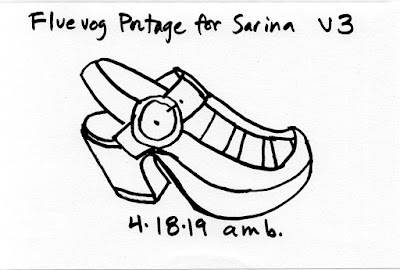 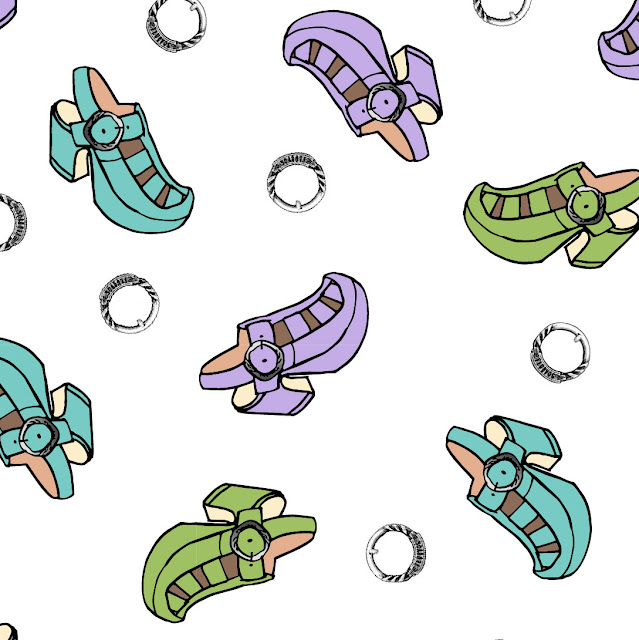 I have been interested in patterns and repeats since the 70s, when the Pattern and Decoration movement was all the rage. Back then I used silkscreen. Today, I use a mouse or tablet at the day job and ponder how I will bring pattern back into my fine art.

I've been teaching Photoshop and Illustrator as they relate to the textile and fashion industries since 1995. I will tutor privately (in Los Angeles area).

click on image
[I get a commission from sales. Thanks!]